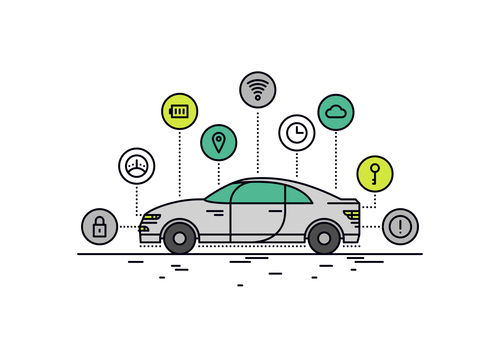 No one predicts that fully autonomous cars will clog streets and highways until at least the next generation of drivers. But within two decades, these cars will be driving the kids to school and handling our daily commutes.

Google, which is leading the charge in the autonomous vehicle conversation, expects to see fully autonomously operated automobiles within two to five years. The cars will be test vehicles, collecting data on interactions with other cars, pedestrians and even squirrels—among other unpredictable factors that have, until now, made driving reliant on human brains.

In driverless cars, computers embedded with data analytic systems hook up with sensors and cameras to do the thinking instead. The shift toward driverless cars should come as no surprise to anyone, given the recent explosion in automotive telematics systems like adaptive cruise control, frontal collision avoidance and lane departure and blind spot warning. Such semi-autonomous systems are taking on more responsibility for making safe driving decisions as drivers take on less.

“We’re seeing a shift to where the driver is ceding more and more control of the vehicle to the vehicle,” says Adrian Lund, president of the Insurance Institute for Highway Safety.

Assuming the various autonomous driving features are safer than relying on driver experience and intuition, automobile insurance costs will decline. And strong evidence suggests that’s the case: Autonomous emergency braking systems that direct instantaneous deceleration and braking of a vehicle are directly responsible for a 15% reduction in frontal crashes, Lund says. The statistic derives from a decrease in property damage and liability claims involving vehicles that feature the system.

Obviously, if cars are safer, claims will be fewer—and insurance costs will fall accordingly. But higher claims severity will somewhat offset the decrease in claims frequency because the sensors, cameras and complex software providing both semi- and fully autonomous driving are far more expensive to replace and repair.

“Nobody is under the presumption that the technology is foolproof and accidents will be reduced to zero,” says Robert Hartwig, president and chief economist at the Insurance Information Institute. “Trees will still fall on cars and flooded streets will not go away.”

But those obstacles aren’t likely to impede the migration toward driverless cars. A recent study by Boston Consulting Group (BCG) posits that fully autonomous vehicles could reach 19% of the total automotive market by 2035.

Auto manufacturers have initially introduced semi-autonomous features in high-end automobiles, to be incorporated into lower-priced models later. So the 2015 Tesla Model S P85D’s advanced autopilot cruise control with 360-degree sonar and cameras that monitor the surrounding highway to adjust speed and sharpen steering will gradually find its way to cars at your local dealership.

And into your garage. People want self-driving vehicles, according to the BCG survey of 1,500 drivers: More than half (55%) say they would “likely” or “very likely” buy a semi-autonomous car, even if it cost more. And 44% say they would buy a fully autonomous vehicle in 10 years, assuming one was available.

The reason is not enhanced safety, but rather an expectation of lower insurance premiums. BCG estimates premiums would fall 30% per vehicle as a result of fewer accidents and improvements in overall safety. According to the study, “After three to four years of demonstrated benefits, such cost savings could help persuade cost-conscious consumers to adopt fully autonomous vehicles at an accelerated rate.”

A 30% reduction in premium volume for the private passenger automobile insurance market—even 20 years from now—will hurt providers. Hartwig says the industry “is well aware of this and will adjust, as it has to countless other technologies that have been introduced into vehicles, from airbags to antilock brakes. We are fully behind anything that reduces accident frequency and severity.”

Richard Attanasio, vice president at A.M. Best & Co., says semi-autonomous features like lane departure warnings and crash avoidance systems are already impacting insurers. “We’re seeing pressure on auto rates right now—downward pressure,” he says. “And this pressure is expected to continue because there will be less and less premium for auto insurers to go after.”

Agents and brokers must read the same forecast and prepare accordingly, says Dobbins: “If you’re heavy on the personal lines side, the next logical thing is to think more about enlarging your commercial lines book.”

As automakers install more autonomous driving features inside vehicles, the risks will continue to evolve. “It’s not as if the creation of these technologies eliminate all risk,” Hartwig says. “In fact, they create new risks.”

What if the Internet shuts down or hackers attack traffic control systems? “There’s no way today to hack into 100,000 vehicles at once and say ‘Stop!’” Hartwig notes. “Eventually there will be.”

And what if a municipality is required to inform the region’s traffic control system of an ongoing pothole repair on a street, or notify the system that utility workers are pruning trees along the meridian? In this scenario, the municipality would potentially be at fault in the event of an accident.

Automakers will also be in the crosshairs. As they continue to introduce more sophisticated semi-autonomous features and endeavor to make fully autonomous cars down the line, they will arguably be more accountable for a car’s safety. “As the car is in control of the auto manufacturer’s autonomous systems, there will probably be more liability for the manufacturers if something goes wrong,” Lund says.

That’s a bit of good news for insurers of product liability—not that assigning liability will be easy. “If there is an accident, is it the driver’s fault or the automobile manufacturer’s fault?” asks Katie DeGraaf, senior consultant and head of product delivery for the usage-based insurance line at Towers Watson. “I think we’ll see a shift in losses. The degree to which this will happen—we just don’t know yet.”

Another insurance consideration that may arise in the future comes from the marriage of autonomous cars and ridesharing services like Uber. “If people are no longer driving their vehicles and the car is just sitting in the garage 95%, they’re more likely to summon a driverless car on their app,” Hartwig says. “The car shows up at the house and you tell it where to go. Has the liability now shifted to the service provider or the manufacturer?”

Car repair shops may also face more responsibility. When a highly advanced semi-autonomous car needs maintenance, the work will be extremely sophisticated. Some pricey cars today boast as many as 150 sensors.

“If you own a brake repair shop, the sensors communicate with the brakes,” explains Adam Wolfson, owner and president of New York City-based Wolfson Insurance Brokerage Inc., which serves a predominantly high net-worth clientele. “This is not like fixing brakes in the old days. The risk of making a mistake is much higher.”

For now, society can look forward to a day when parents can worry less about their teenagers at the wheel—it will be Google or Audi or Tesla at the wheel instead. But for insurers and agents, the prospect presents more sober considerations. “It’s hard to say there will always be a need for automobile insurance,” Lund acknowledges. “But, at least for the foreseeable future, there will.”

This article was originally published at iamagazine.com.

Leadership and Legacy: When Enough Is Enough at the Top